For many collectors, Fostoria glass is a seductively beautiful obsession that deserves all the attention it gets. Objects of great beauty deserve recognition, and part of the fascination of these wonderful objects d’art is that they are well within the budget of any collector. So what is it about collecting Fostoria glassware that persuades so many people to become involved in it?

Fostoria glass ranges from beautiful stemware available in a variety of vibrant colors – most are presented in varying shades, and you will look far to find any in a single color – and offer the collector a fabulous range of designs. However, in saying that, what are the distinguishing features that characterize Fostoria glass from any other type of glassware?

In fact, as a collector, the question you should be asking is ‘How can I tell that this is genuine Fostoria glassware that is worth me purchasing?’ Here are some answers to that question, although like collecting any form of tableware, you must beware of copies, and also of new releases of such stemware when you are unaware of its history.

First, the Fostoria plant got its name from Fostoria in Ohio where it commenced production in 1887. It moved to Moundsville in West Virginia in 1891 and continued manufacture until 1993, when it was bought out by Lancaster Colony. The Fostoria plant finally closed in 1986, and anything dated after that is not Fostoria, although the designs may have been used by other firms. 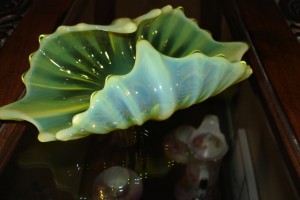 True Fostoria glass contains phosphorus impurities and you can test for this by using a black UV lamp in a dark room: Fostoria glassware will display a faint yellow light emission caused by the effect of the UV light on phosphorus, while Whitehall glass, made by Indiana Glass, will not.

There are other tests you can use to identify genuine Fostoria glass or crystal, including the fact that Fostoria was made by pouring the glass into moulds before cooling, the genuine moulds having three seams. Others used only two seams or were blown without any seams. There are also several design differences between true Fostoria and others manufactured to a similar design. More on this later.

One of the benefits of collecting Fostoria pieces is that there are plenty designs and color variations. You can focus on collecting specific pieces – such as only vases or wine glasses, specific colors or color mixtures, and also collect them by age. Whichever you decide to focus on or even just to collect Fostoria glass pieces period, you have a marvelous selection available to you.

Another benefit is that you don’t have to look too far to find Fostoria. You can find pieces in a large number of antique shops, flea markets and even online from antique stores, individual sellers or even eBay. This type of typically American glass is not difficult to collect.

During the 1930s depression era, certain products were subsidized, including glass. The Fostoria Glass Company was one of those offered a subsidy to manufacture glass, and the product marketed through this subsidy is known as ‘depression glass’. This was pressed into molds, and was particularly brittle, and although most pieces have now been broken or chipped, perfect examples of this Fostoria Depression Glass are now very collectible.

It was frequently used for prizes at various stalls, and the movie theaters would often give pieces of Depression glass to their patrons and advertisers. However, the most prized glass during this period was the Elegant range of stemware and dinnerware. The Elegant line was given a much superior finish to any of the other Fostoria glassware, and would normally be finished by hand, the surface fire polished to remove any rough areas on the surface and to remove any mold marks. 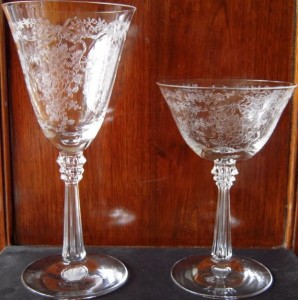 The designs would be acid-etched and rendered smooth, while the bottoms would be ground flat and smooth to produce a high-quality finish that was smooth to the touch, much like the high quality crystal of today. The Elegant line was produced from the 1920s to the 1950s and is a very collectible range of Fostoria glass.

Most collectors tend to collect the colored stemware, although others like to collect examples of the pattern known as American or Whitehall. The problem is that the American pattern continued in manufacture after Lancaster Colony took it over using Fostoria Molds, but Indiana Glass also made the pattern, or a very similar one, calling it Whitehall.

There are certain manufacturing differences that render the two forms of glassware of a different quality to each other. The Whitehall bases are less flat, making the pieces less stable, and a different mix of minerals was used to make the glass itself. The molds are different and overall, the Lancaster or Fostoria American pattern and the Indiana Whitehall versions are discernibly different.

However, if you use the tests as described then you will see the difference. This simply adds to the fun and enjoyment of collecting Fostoria glass which is just another example of how collecting in general can be thought-provoking and provide you with challenges.