In its heyday, Weiss Jewelry offered stylish costume jewelry at affordable prices, so affordable, in fact, that many believed it must be of low quality to be so cheap. Nothing could be farther from the truth, although the founder, Albert Weiss, did decide to market a low end and a high-end range of costume jewelry.

Weiss had originally worked with the Coro costume jewelry company before he decided to leave and set up business for himself. His company was founded in 1942 as Albert Weiss & Company, using Austrian high quality rhinestones, clear glass, colored glass stones and faux pearls, the range being particularly prized in the 1950s and 1960s.

Before they shut their doors for the last time in 1971, the Weiss company had produced a beautiful range of fabulous costume jewelry, even one piece of which could liven up an ordinary outfit and make it something special. His pieces looked particularly good on dark colored clothing, and were designed to accentuate the beauty of the wearer and give a sparkle to the lackluster clothing of the post-war years of the 1940s and 50s.

His style was unmistakable, popular motifs including floral arrangements, fruits, Maltese crosses and Christmas trees. The stones were predominantly prong-set, with four prongs holding the stones in silver-toned, gold-toned or japanned settings. His favorite stones were Austrian or aurora borealis rhinestones and so-called ‘black diamonds’ that were in fact dark smoky quartz crystals.

However, they were very effective and looked magnificent then, maybe even more so now because such quality is rare in moderately priced costume jewelry. And, they’re also very collectible. Weiss jewelry is still available today at reasonable prices, although his (Weiss’s) work has been appreciated more after his death than before, when it was regarded as a cheaper alternative to Chanel and Dior equivalents. That may be true, but price is not necessarily and indicator of quality, and few doubt now that Dior and Chanel costume jewelry may have cost more, but did not possess the craftsmanship of Albert Weiss. 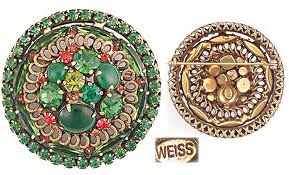 In fact, Weiss jewelry is now so much in demand that many fakes have been produced. Weiss is probably copied more than any form of designer jewelry. Most fake Weiss jewelry is easy to spot, the stones being less brilliant and colorful, and you will often find that the stones are glued into the setting, and not correctly prong set. However, not all Weiss was set in prongs.

Genuine Weiss pieces will be marked ‘Weiss’ in script or in block capitals, with ‘Albert Weiss’ or with AW Co, with the W in the shape of a crown. Some pieces made after 1955 also have a copyright mark after the name, though not all. If you find the copyright mark on a pre-1955 piece you be almost certain that it is a fake.

If an outlet is offering a number of Weiss pieces of the same design, then they are likely fakes, and if you already collect Weiss Jewelry, you will know the fake because it looks duller and cheaper than an authentic Weiss. Weiss costume jewelry was also made for wholesale delivery to a number of larger department stores, and many of these were not signed at all. So the lack of a signature mark does not necessarily indicate a piece to be a fake.

You are recommended to seek the advice of an expert on Weiss pieces before making a decision on its genuiness, particularly a piece that has no accompanying provenance to prove its authenticity. You will find many pieces of Weiss costume jewelry in antique stores and auctions, including online auctions such as eBay. You will also find them being sold in garage sales and flea markets, and if you pick a piece of Weiss under $100, then you could likely sell it at a profit without trying.

Collecting Weiss jewelry is a fascinating hobby for anybody, because there is rarely the need to pay large sums of money for a piece. True, high-priced pieces are available, but you can easily build up a good collection without breaking the bank. If you start off going around the less salubrious antique shops and attending antique shows and sales, you should be able to start your collection quite easily.

Even now on eBay there is piece on sale claimed to be marked ‘Weiss’, though it clearly says ‘Wess’ on the photograph. You have to be careful and check every claim carefully to make sure that you aren’t buying an obvious fake, or you might not get refunded your money. Either this is a fake or genuine error, in which case it could be extremely valuable! But I think not. The stones are poor quality and the piece has no apparent Weiss signature sparkle.

Collecting Weiss jewelry will give you a great deal of pleasure and fun, and you will be enthralled at how lovely some of these pieces are. It is difficult to believe that they are costume jewelry, such was the imaginative genius of this man.

Find Weiss and other vintage jewelry in Central Kentucky shops.