By Nessa Conley Speirs on assignment for CentralKentuckyAntiques.com

“We’ve been to a lot of auctions, but we can actually understand you!” 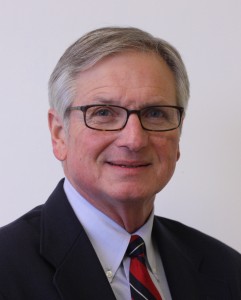 In 1999, Filson Graham qualified for early retirement and started Bluegrass Auction and Appraisal, the modest auction business he had been dreaming about since he saw his first auction at age 19. “I immediately fell in love with it. It was almost like a sporting event to me. It had that competitive feel to it, and that stage theater feel to it. I said, ‘When I grow up, that’s what I want to do.'”

Then, his business enjoyed widespread media coverage when he was hired to handle the estate of the late Jim Varney, comedian and actor, most widely known for his portrayal of the iconic Ernest P. Worrell in movies like “Ernest Goes to Camp” and “Ernest Saves Christmas”.

The media coverage from that event helped to put Bluegrass Auction and Appraisal on the map, but Graham says his business’ enduring success has little to do with it. “If I could afford putting my name on the billboards and color pull-outs and brochures it would do nothing more than people telling people,” he says. “Ninety-five percent of what I do is because a friend has heard of me, or a past client.” 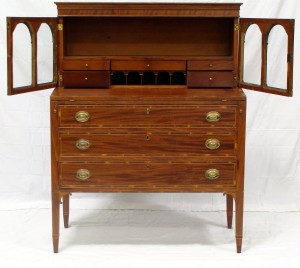 Graham has done numerous estate sales, and not all of them include or focus on antiques. Going into people’s homes and selling their things means he ends up with a gamut, from fine home furnishings down to farm equipment out of garages. Many of the items from estates happen to be period antiques, but that isn’t a prerequisite.

Graham’s process involves first consulting with potential clients about the estates. He says many of those client prospects expect him to come in and tell them how he does things. That’s not how he operates. Approaching each job with an attitude of never knowing what’s going to happen helps him be more flexible for his clients; so instead of having a “process”, he lets his clients tell him what they want. In some cases, they want more control over the estate, going through it themselves and giving him only what they decide to sell–in other cases, clients don’t want to deal with anything; they hand him the reins. It is in these cases, he says, that many of the most interesting, and most valuable, items are found. 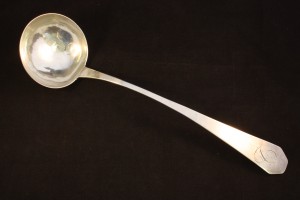 “It’s when we find things in drawers when we’re packing up the estate,” he says. He recounted one such situation, in which he stumbled across an antique silver coffee pot. “Anything can be engraved with anything,” he says, so he didn’t pay much attention to the year–1846–engraved on the inside. It was when he saw the letters “Lex, KY” stamped on the bottom that he invited a colleague, an expert in coin silver, to look at it, and was told it could sell for up to ten thousand dollars. In the end, it garnered $25,000!

This is the story he tells people who worry that their item will go to auction and only sell for five dollars. He reassures them by telling them that auctions bring in a “group of people that have enough knowledge that they are going to bid a fair price.”

Graham’s actual job description is “a little fuzzy”. He sometimes finds himself in more roles than simply “businessman”. Quite often, his clients are in stressful situations when they contact him, as in the death of a loved one, and tensions can run high. It is in these moments that he finds himself in the role of counselor and confidante in order to make the client’s overall experience with the auction process as pleasant and efficient as possible. 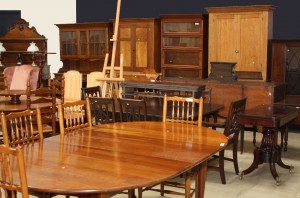 He also feels a great responsibility to expose the excitement of the auction to as many new faces as he can. He still puts modest ads in the newspaper, but with a decided effort to use contemporary forms of marketing and communication, he has expanded his word-of-mouth campaign to include social media tools like Facebook and Twitter. He also posts regularly to Craigslist online classifieds, and he now offers bidding by phone and internet. “I grew up with auctions. To me it was such a natural way to acquire things and liquidate things… I was in the minority. I made it my pledge: I want [people] to know about auctions. I want them to enjoy mine, to enjoy other people’s…it does become a little social center. We have so many people that have their ‘auction friends’.”

Graham says his business has had ups and downs, and that things have definitely gotten tighter since the onset of the current recession and auction prices dropped; however, Bluegrass Auction and Appraisal continues on — “people still passed away, there were still estates to be sold.” And so far, his job continues to surprise him. His favorite time is when he’s walking up to a potential client’s door, the second before he knocks. “You have no idea what’s on the other side of that door—to me that’s the most rewarding part of what I do. They look to me to give them insight on what to do.”

Filson Graham spent forty-five minutes on the phone with me, positively beaming about his business, and it’s clear why. His desire to help clients and auctiongoers in any way he can runs as deep as his love for the spirit and thrill of the auction. “We have just grown, quite frankly, beyond my wildest dreams. I am extremely proud of this business.”

We invite you to visit Bluegrass Auction and Appraisal LLC:

Nessa Conley Speirs is a freelance writer based out of Pittsburgh; she has a Bachelor of Arts in writing from Metropolitan State College of Denver and is working toward a Masters of Fine Arts in writing from Carlow University. She has had work published in a number of online and print publications and is currently a writer for the Hillman Center for the Performing Arts in Pittsburgh. A lover of thrifting, vintage kitsch, and antiques, she is thrilled to have the opportunity to write for CentralKentuckyAntiques.com.