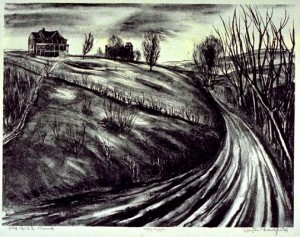 Work Progress Administration Art arose as a result of the Great Depression, and collecting WPA Art is becoming increasingly popular as the true value of such pieces and the artistic flair of those who created them at the time are both becoming increasingly evident, not only to collectors but also to the U.S. Government.

The unemployment level during the Depression stood at 32% and not only was the financial industry in tatters, but everybody was suffering hardship of one kind or another. People had hardly enough money for food, and as for buying art – forget it! President F. D. Roosevelt’s New Deal and the Works Projects Administration (WPA) offered money to people to carry out a wide variety of work, from building bridges to a variety of art projects.

Among these projects were murals, government advertising posters, and many other forms of art including oils and water color paintings and charcoals of a variety of subjects. Some of them involved large works – massive murals for the interiors of public buildings, and artists were invited to produce sketches and reproductions of the work they were offering to do.

This was a very competitive business, and collecting WPA art involves a great many of these examples of an artist’s capabilities including their sketches. Many of the artists either were or came to be critically acclaimed as masters of their day, and included such names as Jackson Pollock, Moses Soyer, Chuzo Tomatsu, Ivan Albright and Philip Guston. These works were administered by Federal Project Number One, known as Federal One, responsible for funding unemployed artists in the fields of painting, poster painting, murals, sculpture and photography.

But what happened to these works as the economy improved following the Great Depression, particularly during the boom after World War II? Canvases by such as Jackson Pollock and Mark Rothko had been bundled together in a central warehouse, and sold by the pound in Flushing, New York. Around 4 cents/pound was the going price for these works that grew in value along with the stature of their creators. Collecting WPA art was very inexpensive then, but not so much now.

The quality of these artistic creations was of the highest order, but because of its origins was not recognized in its day as being of any specific value. After all, nobody had money to buy art, so it was simply set aside, bundled up and left, likely until the space was needed for something else when it was sold off by the weight just to get rid of it. 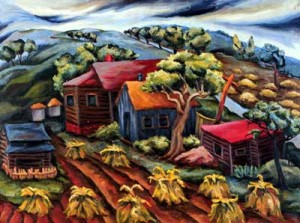 Works of art such as the oil on canvas ‘Scenes From Rip Van Winkle’ by Artist Victor Pedrotti Trent, and ‘Communications’ by Ingrid Edwards that are now almost priceless would have been left to rot had these works not been disseminated throughout the country. Prints were produced in limited editions of 25 and some of these originals are on sale on eBay today, such as the Bernard P. Schardt original signed print of ‘Betty’ at $550.

Collecting WPA art need not involve the expense of originals, and there are many reproductions and prints available apart from the original sets of artist-signed prints and posters. Naturally, few can afford a genuine Pollock but the WPA period was so diverse that it is possible to specialize in collecting WPA art, either by artist, genre or even by subject. The quality is very high, particularly the ‘cartoons’ of the murals that each artist produced to persuade the authorities to give them the work.

Today, the art produced under the auspices of Federal One is being inventoried under the WPA Art Inventory Project, a government project to establish the whereabouts of all WPA art produced. In fact, the U.S. Government appears to be laying claim to all of this art and while not exactly asking for its return, it has been successful in stopping the sale of some original pieces on eBay and other sites.

The objective of the government in doing this is open to question and the possibility that they will claim ownership of all WPA work, possibly on the pretext that it paid for the work when it was carried out and therefore is still the rightful owner. This itself is questionable in view of the bulk sales previously referred to. However, who will take the first step in challenging this? Meantime, ‘owners’ of such work should still be free to sell it since there is no suggestion yet that its return is being demanded.

Collecting WPA art offers the collector a fabulous choice of artistic endeavor carried out during a very lean period in American history. Sometimes such periods can bring the best out of an artist, and the WPA period was no exception. Some of the most stunning works ever created by artists such as Edward J. Ades, George Avison, Leslie Benson and the aforementioned Ingrid Edwards were painted during this period and WPA art is a culture unto itself and a rich source of material for lovers of art.

Click here to search for great art in central Kentucky.