Joe Ley Antiques – A Profile in the Unusual

By Tricia Neal, on assignment for CentralKentuckyAntiques.com
Copyright 20 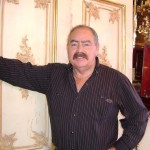 As a boy, Joe Ley would peek through the tents at Louisville’s Fontaine Ferry Park to watch families enjoying the amusement park rides there. The brightly painted carousel horses, in particular, caught his eye.

“I couldn’t afford to get in, but I always thought that if I ever had any money, I’d buy those horses,” he recalls.

Joe was an orphan, raised to fend for himself. He was passed from home to home throughout his childhood.

“It wasn’t the brightest light in my life,” Joe says of his youth, “but it opened my eyes to doing better. I had to make it on my own – or not make it.”

Joe is recalling his childhood from his office inside Joe Ley Antiques – the antique store he owns and which is named for him, located just down the street from where Fontaine Ferry Park once stood. Inside the store, among countless other unusual pieces of memorabilia, are brightly painted carousel horses from the amusement park which closed in 1969.

For an antique lover, a visit to Joe Ley Antiques is a bit like a trip to an amusement park. The shop has been described as “an experience,” and patrons have come from near and far – even as far as Asia and New Zealand – to savor it.

“People say, ‘I’ve never been to a place like this,’” Joe says. “That’s a good compliment. It‘s not your normal antique shop.” 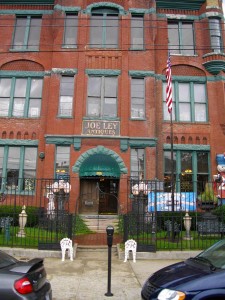 The structure which houses Joe Ley Antiques is an antique itself. The main building is a schoolhouse, built in the 1890s. That building is joined to another structure by a walkway. In between, shoppers can stroll past gardens speckled with antique urns, streetlamps, and sculptures.

“It’s an enormous building,” Joe says. “Two acres under one roof. … Thirteen-foot ceilings on all three levels. … The building occupies half of a city block.”

Visitors quickly realize they’ve discovered a gem. Where else are shoppers greeted by two towering toy soldiers and then dazzled by hundreds of chandeliers dangling from above?

“When you see it from the outside, you have to want to come in and see what’s inside,” Joe says.

Joe can’t quite put his finger on the most unique item in his store – but he is quick to point out what might be the largest: A 40-foot cupola he rescued from the top of a building slated for demolition. No doubt coveted by many, the cupola, Joe says, is not for sale.

How does an antique store become stocked with so many unique pieces? With persistence and plenty of elbow grease.

Joe Ley has been in business for 48 years – dating back to his humble beginnings, when he drove a shoddy truck from town to town, pilfering through barns and sheds in search of old items he could buy and resell. (Yes, this type of antiquing began way before ‘American Pickers’.)

“I couldn’t afford a motel room … so I’d pull out a quilt and sleep in the back of the truck,” he recalls. Knowing that he was rising above the hardships of his childhood made all the hard work worthwhile.

“My work ethic might have gotten a little carried away,” he laughs, “but when you’re doing it for yourself, it feels a lot better.”

Joe’s original clients mainly consisted of restaurateurs who wanted unique themes in their places of business, but his business has evolved as trends have changed. He was rehabilitating old shutters and doors long before architectural salvage became a popular theme.

“I went several years without selling any of it,” Joe says. “Nobody wanted it. But when they did want it, I had it. … I try to stay with what’s in vogue.” 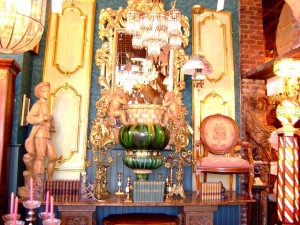 Don’t be fooled by the elaborate items in Joe Ley’s store. The business owner ensures that even the thrifty can enjoy finding bargains there.

Joe Ley Antiques is located at 615 East Market Street in Louisville. Store hours are 8:30 a.m. to 5 p.m. Tuesdays through Saturdays. In spite of its size, the business is maintained primarily by Joe and his daughter – so if you’re making a special trip, it’s best to call first (502-583-4014) and make sure the store will be open. When it is, you’re certainly in for an unusual treat!

Tricia Neal is an award-winning journalist/photographer based in Somerset, KY.